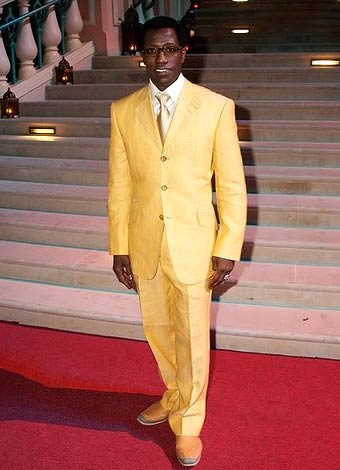 Wesley Snipes was convicted of tax evasion in 2008, and sentenced to three years after losing his appeal in 2010. Snipes claimed he was misled by his financial adviser. But according to a piece in Forbes, he may have been part of a radical anti-tax group who, instead of money, would basically send a letter to the IRS every year saying that the IRS didn’t actually have the power to collect taxes. See if you can guess how that worked out.

A July decision by the 11th U.S. Circuit Court of Appeals upholding Snipes’ conviction and sentence recounts how after becoming involved with the American Rights Litigators organization, Snipes failed to file individual federal returns from 1999 to 2004, despite grossing more than $37 million during those years. According to the decision, instead of 1040s, Snipes sent the IRS correspondence advancing various theories as to “why the IRS was powerless to collect income taxes from him” including “that he was a `non-resident alien to the United States,’ that earned income must come from `sources wholly outside the United States,’ that a `taxpayer is defined  by law as one who operates a distilled spirit Plant,’ and that the Internal Revenue Code’s taxing authority `is limited to the District of Columbia and insular possessions of the United States, exclusive of the 50 States of the Union.’’’

Needless to say, saying “this is why I don’t need to pay” to the people who get to decide what you pay is not a very good idea. The government threw the book at him, and even after he had Judge Joe Brown as a character witness! Is nothing sacred? But now is not the time to dwell on the past, Wesley Snipes is a free man!

Snipes, 50, remains inmate #43355-018 on the Federal Bureau of Prisons registry, but on April 2 the actor was taken out of jail and placed in the New York Community Corrections — which is a home confinement residence for pre-release inmates who remain in Federal custody.
The Blade star will be completely free on July 19. [RadarOnline]

Snipes entered prison in December 2010, meaning he served almost his whole term. No word on whether he made his cell mates call him “Blade.” I’m just excited that he’s out, if only to see what combinations of hats/suits/ethnic attire he’ll be photographed wearing in the coming months. As a sartorial innovator, Wesley Snipes was basically Terrence Howard before Terrence Howard was Terrence Howard.

Now that he’s out, there’s only one thing left for Wesley Snipes to do. And that’s kill Edgar Friendly.

The post Wesley Snipes is out of prison! appeared first on FilmDrunk.