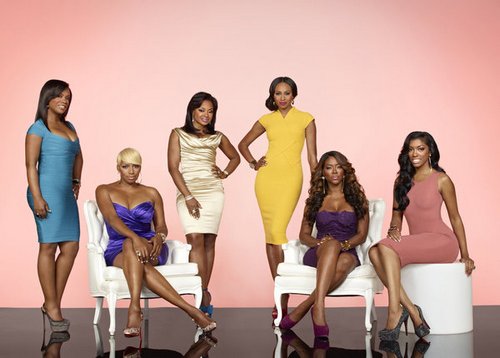 I’ve long believed Real Housewives of Atlanta‘s popularity in part derives from its diversity. While all the other Housewives franchises are serving up rich, white ladies of the bleached and botoxed variety, Atlanta has stood out from the pack by offering variety – and one that better represents America. Apparently NeNe Leakes agrees with me.

“In the…’Real Housewives’ franchise, we are the only brown girls,” NeNe said speaking to The Insider. “You can always turn on the TV and see those Beverly Hills girls, those Miami girls, those New Jersey girls, [and] New York girls and you still sort of…get the same flavor, but when you turn and see the ‘Real Housewives of Atlanta,’ you’re getting a group of brown girls.”

NeNe also believes the lack of obvious plastic surgery and the still moving faces has something to do with why viewers watch. It is true that Atlanta serves up emotion like none other – and it’s possibly because their faces have more than one frozen, puffy expression!

“With us, we’re not so plastic surgery,” NeNe shared (other than the boob jobs, of course – of which are in abundance). “[On] these other franchises, everybody’s so plastic…We’re just regular girls. We’re really keeping it real, and I’m always surprised when people say, ‘Are you guys scripted?’ We’re so not scripted; we’re just a disaster.”

And in an interview with Vulture, NeNe dished on the phone call to Tyler Perry (they’re “really good friends” ) that never was from last week’s premiere and why she believes She By SheBroke became She by SheByeBye.

On Tyler Perry: NeNe maintains the number she called was “the right number” but blames a crazy voice mail message for the antics. “He has this on his phone, this crazy silly voicemail that goes [in a high-pitched voice] Doo doo doooo. The number you have reached has been disconnected. It’s just something he has on his phone, but that is his phone number.”

Tyler, hellooooooo, can you confirm this friendship? Kthxbai.

Anyway, apparently they are just the bestest and closest of friends so no need for us to assume NeNe was trying to worm her way into the A-List social set Kim Kardashian-style.

“We talk all the time. At least every week I talk to Tyler. We both live out in Atlanta. He usually advises me, he’s like a mentor to me,” NeNe insists. “He’s just regular like me. We talk about all kinds of stuff, even if we’re not talking about the industry, and we laugh all the time. He’s super hilarious.”

“Wherever he goes, people are going to be asking him, ‘Do you really know NeNe?’ And he’s gonna be like, ‘Absolutely.’”

As for Sheree, here’s what NeNe says happened:

“[The producers] chose not to pick up her option for this past season. I know she’s out there telling people that she decided to leave the show, but from what I know that is not what she decided to do. That is what they decided to do. She put out whatever reports she wanted to put out and I don’t think they tried to challenge it because they don’t really give a shit at the end of the day.”

And finally, NeNe dishes on her ever-fraught relationship with Kim Zolciak. And no, viewers cannot expect a reunion this year, but they can expect some civility. Dare I say it, adult behavior on a Housewives series? Well, I’ll be damned…

“I’m not trying to have a relationship with [Kim] her, but I can say that I do speak to her. Because ‘Hello’ costs me nothing,” NeNe confesses.

“It’s not like you’re gonna see us going out and having ice cream, but we can definitely be in the same room. You’ll see what happens. There’s always something with NeNe and Kim.”

And speaking of Kim, apparently there is no longer a Kim and Kandi Burruss either! Following this season, Kandi apparently reached her breaking point with Ms. Tardy For The Payment and they no longer speak!

Interestingly, the reason has nothing to do with bills owed and payments not rendered and wigs that are fake, but with baby names! Kandi recently dished in her blog about how she and possible husband (rumors have been circulating that the pair married in secret), Todd Tucker have been planning to name any future sons Kash and they were quite surprised when Kim and Kroy Biermann essentially hijacked the name for their own youngest son.

Well, an insider tells Wetpaint that was the wig that broke the Housewives’ neck for Kandi. “Let’s put it this way, Kim naming her child Kash was not something Kandi had been expecting. When she found out … it caused problems.”

“If she had plans all along to name the baby Kash, Kandi knew nothing about it,” the insider adds. “Things are strained between them now, no doubt. I don’t think they’ve spoken in a few months.”

Well. Baby names can be very cutthroat, but I think Kandi was done with Kim long before Kash came along. And I think it was Kash with a C that actually came between them. That and disrespect!

And finally, tonight is an all-new episode of RHOA. Things get quite dramatic at a party where NeNe comes face-to-face with Kim and Cynthia and Kenya continue to have problems!

Real Housewives of Atlanta airs tonight on Bravo at 9/10c. Reality Tea will be live-tweeting all the mayhem and ruckus and you should so join us, cause we’re like kind of hilarious, you know.

TELL US – DO YOU THINK ATLANTA’S DIVERSITY MAKES IT SO POPULAR? DID KIM STEAL KANDI’S FUTURE BABY NAME?