Atlanta Reporter Gets Punched In His Mouth For Violating! 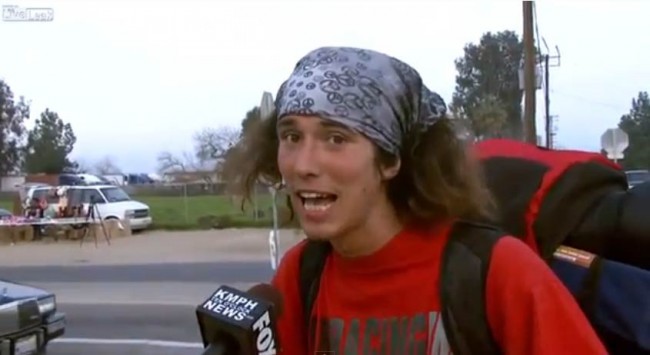 Excuse my non-movie-related digression here, but I just saw this story over on WarmingGlow and thought it deserved an immediate double post because it’s probably the greatest thing I’ve ever seen. Basically, Kai here is a homeless hitchhiker. The other day, a 300-pound lunatic picked Kai up in his truck in Fresno. Then the guy told Kai he raped a 14-year-old in the Virgin Islands once, declared himself Jesus, and pinned an innocent bystander with his truck and bum rushed a few women. Luckily Kai had a hatchet in his pack, and Kai smashed the guy in the head with the blunt end before he could hurt anyone else. An event Kai describes as “f*ckin’ gnarly man. It was like the biggest wave I’ve ever ridden in my life,” in probably the greatest local news interview of all time, with Fox affiliate KMPH. We Fresnans don’t have a lot to be proud of, but I think Kai just shot to the top of the list. Sorry, Kevin Federline.

If you watch any unedited news interview today, let it be this one:

A few things about this:

Kai pronounces bag “beg,” and there are definitely some traces of West Virginia dialect, where he says he’s from. But he also talks like a Jeff Spicoli Valley dude, pronounces his vowels like a Canadian, and uses “I” instead of “me” like a Jamaican. This man is a linguistic mystery.

3:09 – Q: “Have you ever done anything like that before?” Okay, that is just an amazing question. Even more amazing, Kai has. He once knocked all a guy’s teeth out in an orchard. Maybe he hangs around in a lot of orchards, which would explain the hatchet.

3:36 – “Bro, if you’re f*ckin Jesus Christ, like I’ll be the anti-Christ, like f*ck that shit.” Kai speaks in poems and dispenses catchphrases better than a Schwarzenegger movie. This man is a star.

4:59 – “What’s next for you, Kai?” First of all, that is another amazing question. Kai is incredible, but don’t sleep on this reporter, the John Stockton of transcendent local news coverage. Clearly, Kai walks the Earth like Cane from Kung Fu, living the life of a drifter vigilante that Jules dreamed of in Pulp Fiction. Kai’s answer? “Hopfully some surfin’.” “If anybody’s watching this with a mini-mal (?) they could lend a guy, with a wetsuit, I’d love to test out Mavericks.” A homeless, surfing, superhero. This guy is a real-life ninja turtle.

This is the greatest thing ever. I am going to watch this 10 more times. Also, not to brag, but my cousin works at that recycling center.

UPDATE: Thanks to RDFIII for the gif: