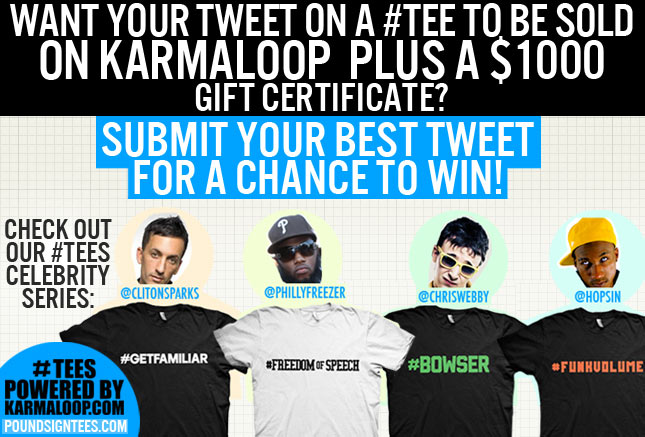 BOSTON – (Friday, June 29th) – Streetwear powerhouse Karmaloop.com today
announced that the company has teamed up with social media giant Twitter to let fans
transform tweets into tees. Karmaloop’s Twitter fans can login and use their Twitter
identity to nominate and vote for tweets that deserve to be emblazoned on a t-shirt at
poundsigntees.com. Every two weeks, tweets that get the top votes will be immortalized
on a t-shirt and sold as part of Karmaloop’s #Tee Collection, which features work by
youth culture icons like Clinton Sparks, Hopsin, Freeway and Chris Webby.


“A lot of my fans have been asking for #GetFamiliar Tees,” said Clinton Sparks, a
Grammy-nominated songwriter, producer, DJ and recording artist. “This was the perfect
opportunity to make it happen while giving them a chance to make their own #Tee.”

Karmaloop’s Twitter fans (@Karmaloop on Twitter) can nominate their own tweet or
someone else’s pithy, 140-character or less statement by creating a tweet directly from
Twitter using the #tee hashtag, submitting a URL to a favorite tweet or conducting a
tweet search. Nominees can’t vote for their own tweets, but shameless self (or friend)
promotion is not discouraged: Nominators and nominees alike are free to pump up their
favorite tweets online using social media platforms and blogs to urge friends to cast their
votes at poundsigntees.com.


Nominated tweets are up for a vote for seven days. Every two weeks, Karmaloop will
tally up the votes. Winning tweets for that time period will be emblazoned on t-shirts and
sold as a limited edition on “Verge” culture ecommerce fashion site Karmaloop.com,
where they will be seen by millions of the Internet’s most style-savvy shoppers. The first
winner gets a $1,000 gift code.


“Everyone knows Karmaloop,” said noted rapper Hopsin, whose t-shirt is a #Tee
Collection favorite. “If you’re shopping online, one of the first places you go is KL. Plus
Dizzy’s already on Karmaloop – I had to get up too.”

The Karmaloop team is confident that a chance to turn a favorite tweet into a t-shirt will
inspire the company’s most creative Twitter fans worldwide. Find out more about the
novel Karmaloop-Twitter t-shirt project at www.poundsigntees.com. Learn more about
Karmaloop at www.karmaloop.com.

About Karmaloop.com
Karmaloop.com is one of the world’s largest and most-respected online retailers
of “streetwear” (including footwear, apparel and accessories). The company was
founded by Greg Selkoe in 2000. World headquarters are in Boston, with an office
and TV studio in New York City, and office in Los Angeles, and Karmaloop Europe 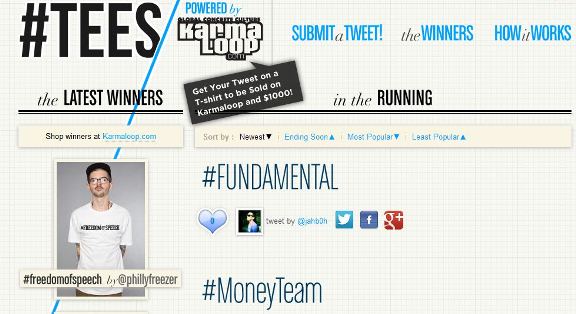