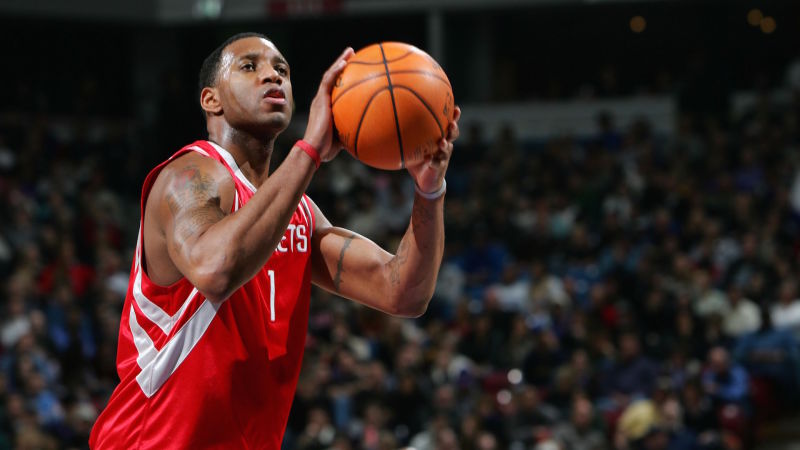 Tracy McGrady was one of the best scorers of this generation, taking home the NBA’s scoring crown twice throughout his illustrated career. T-Mac received a life-changing phone call on Saturday (Apr. 1), informing the seven-time All-Star he was among those elected to the Naismith Memorial Basketball Hall-of-Fame for 2017. “I didn’t win a championship, I didn’t have much playoff success, but this is my championship and it’ll be forever,” said a humbled McGrady.

T-Mac could get buckets at will from anywhere on the floor and was one of the premiere high flyers prior to his knee surgeries. The 37-year-old was originally drafted straight out of Mt. Zion Academy High School in 1997 where he teamed up with his cousin, Vince Carter on the Toronto Raptors. To blossom into the superstar he knew he was, McGrady made his way to Orlando in 2000 making a name for himself while leading the NBA in scoring in 2003 and 2004. Unfortunately, he was never surrounded with enough talent to propel the Magic to a deep playoff run.

Congrats to my brother, and one of my favorite players ever @Real_T_Mac on the Hall of fame nod!

The what-ifs continued when the Magic dealt McGrady to Houston for a package centered around Steve Francis where he would team up with 7’6″ Yao Ming from 2004 through 2009, but injuries plagued the both of them at different times throughout their Rocket careers. McGrady put up perhaps his signature NBA career moment in Houston, when he stunned the San Antonio Spurs on a December night in 2004 by dropping a ridiculous 13 points in 33 seconds, including a game winning shot to lead Houston to victory. Still a jaw-dropping feat for any fan to witness to this day.

By the end of his Rockets tenure, McGrady was a shell of himself at 30-years-old, where he made pitstops in New York, Detroit, Atlanta, San Antonio and even China to round out his basketball career from 2010 to 2013.

While reflecting on the Hall-of-Fame moment, McGrady said, “I did get emotional. I did start crying, I’ll tell you that. I was trying to call my wife once I got off the phone, but my eyes were so watery, and I was so nervous, I was opening up every app on my phone but the right one to make a call.”

T-Mac capped off a stellar career with averages of 19.6 points, 5.6 rebounds and 4.4 assists per game which doesn’t even do his talent justice. He endured numerous classic head-to-head battles with his cousin Vince Carter, Allen Iverson, Kobe Bryant, LeBron James and many more throughout his career. Most believe if not for the knee injuries he had the chance to be up there with the greatest ever. McGrady was a class act on the floor and a role model for kids across the globe.

Congrats on the honor to one of the best to ever step foot on the hardwood.

Written By Michael Saponara Via VIBE