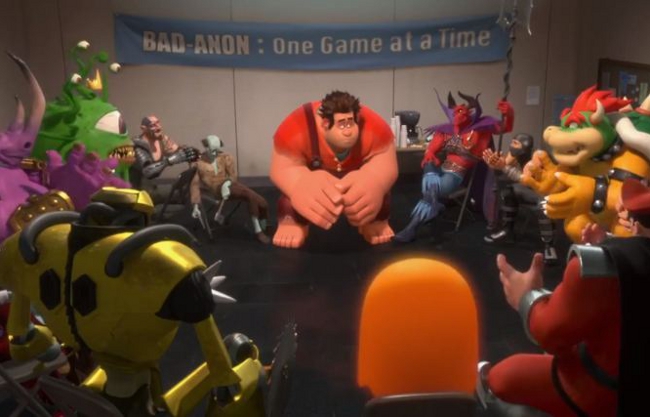 Wreck-It Ralph tells the story of a video game villain who finally grows tired of being the bad guy and wants to be popular. Even more, it tells the story of how brilliant Disney is to know that a generation of now-adults, who grew up playing 8- and 16-bit Nintendo games, would rush to theaters to pay $15 to celebrate classic characters from games like Q-Bert, Super Mario Brothers and Street Fighter, because we so eagerly pine for the good old days. Damn it, being an adult sucks.

Ralph hits theaters on November 2, so we can expect to see the promotional campaign ramped up over the next three weeks, and traffic on sites like VirtualNES shoot through the clouds that Mario can somehow walk on. This week, Disney released a new international trailer for Wreck-It Ralph, and just go ahead and take my damn money now, Mickey.

Wreck-It Ralph (voice of Reilly) longs to be as beloved as his game’s perfect Good Guy, Fix-It Felix (voice of McBrayer). Problem is, nobody loves a Bad Guy. But they do love heroes… so when a modern, first-person shooter game arrives featuring tough-as-nails Sergeant Calhoun (voice of Lynch), Ralph sees it as his ticket to heroism and happiness. He sneaks into the game with a simple plan — win a medal — but soon wrecks everything, and accidentally unleashes a deadly enemy that threatens every game in the arcade. Ralph’s only hope? Vanellope von Schweetz (voice of Silverman), a young troublemaking “glitch” from a candy-coated cart racing game who might just be the one to teach Ralph what it means to be a Good Guy. But will he realize he is good enough to become a hero before it’s “Game Over” for the entire arcade?

Who cares? I just want to be able to shout, “Hey, that’s the guy from Double Dragon!”