Hank Azaria on his Heat reaction shot: ‘I was truly scared’ 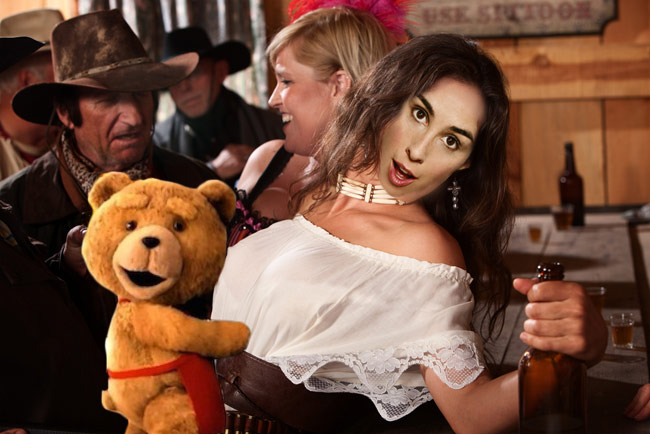 One of my top ten creepiest Photoshops, easily.

Seth MacFarlane was back in the news again over the weekend, when his Oscar producers came out in support of his “We Saw Your Boobs” song, but that non-story gets all of the snooze emoticons if you ask me. Today comes the news that Sarah Silverman is in talks to play a prostitute in a western co-written, directed by, and starring Seth MacFarlane. …Wait, what?

MRC is behind the movie, which boasts a cast that so far includes Charlize Theron, Liam Neeson, Amanda Seyfried, and Giovanni Ribisi. MacFarlane, whose Ted grossed $545.8 million worldwide, co-wrote the script and is directing and starring.

A Million Ways to Die in the West follows a cowardly sheep farmer (MacFarlane) who chickens out of a gunfight and sees his girlfriend (Seyfried) leave him for another man. When a mysterious woman (Theron) rides into town, she helps him find his courage. But when her outlaw husband (Neeson) arrives seeking revenge, the farmer must put his newfound courage to the test.

I call it a female-driven, Old West Hitch with an action element and a revenge angle. GREENLIGHT IT YESTERDAY! FETCH MY COCAINE! Man, I wonder if there’ll be any jokes about him having sex with the sheep.

Sources say Silverman would play the town’s well-worn prostitute, who engages in all sorts of lewd activities but refuses to have sex with her fiancé (Ribisi), believing that as Christians the couple should wait until marriage before lying down together. [THR]

The post Sarah Silverman to play a Christian prostitute in a Seth MacFarlane Western appeared first on FilmDrunk.