Review: A Glimpse Inside the Mind of Charles Swan III is the worst film of the year so far 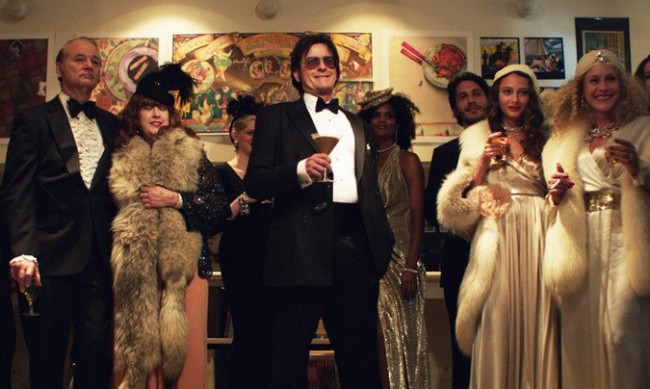 Not a dream sequence, Patricia Arquette actually dresses like that in every scene

I first tried to watch A Glimpse Inside the Mind of Charles Swan III when it was on VOD. I watched about 20 minutes of it and promptly started doing chores around the house. Then I got the assignment to review it, and, out of some misplaced feeling of obligation to watch the entirety of a movie I’m assigned to review no matter how bad, I watched it again. I would not recommend doing this. No one in the film spontaneously gains the power to explode people with their minds, shown in slow motion and multiple angles, a lá The Fury. Morgan Freeman does not show up in the last five minutes to deliver some velvety monolog of pure, blinding insight. In fact, the second half of the movie is a lot like the first: more insufferable, soulless, masturbatory bullshit. On the plus side, it’s a great movie to throw on when you need to finish some housework.

Charles Swan is played by Charlie Sheen, and Charles Swan likes to daydream. He daydreams so much that he often disappears into a daydream only to disappear into a sub-daydream. Unfortunately, these daydreams are boring and so is Charles. I suspect the fact that Charles Swan is played by Roman Coppola’s childhood friend Charlie Sheen is intended to be a lot more symbolic and evocative than it actually is. I further assume Charles Swan is supposed to be some idealized idea of maleness, played by Sheen as some meta comment on our collective consciousness, because everything about him is ultra kitschy and campy and phony, entirely inhabiting some production designer’s non-period-specific art deco sepia dream, where all the women are models and the furniture designed by Roy Lichtenstein. As we learn from Charles’ psychoanalyst in the opening scene, Charles is selfish, he doesn’t listen, and he’s always thinking about sex. That’s… pretty much it. He is infomercial man. A broad, hokey caricature of a dude, a dream having dreams. Oh, and he’s all torn up about his break up with Ivana, a model who owns lots of shoes. Because women be shoppin,’ obviously. This is a movie that thinks it’s Portnoy’s Complaint when it’s barely According to Jim. And let me tell you, there isn’t much interesting about delving into the psyche of a broad, meaningless caricature. Ooh, tell us about your rich internal life, Joe Camel! Dr. Pepper 10 commercials are better satire than this.

The only thing worse than someone with nothing to say is an over-styled person with nothing to say, and this shiny f*cking Jonas Brothers of a movie looks like a wannabe IKEA showroom designer’s demo reel. In order to design a production, you first have to have a production to design. In one scene, Charles Swan dreams of accepting an Oscar, with all of his ex-girlfriends in the audience, for “Best Bullshit.” Because he’s a bullshitter, get it!?? He bullshits to get women! It’s not comedic or insightful or compelling, it’s just sort of there, lovingly costumed and beautifully shot, with no place to go. Who are these people? Why are these people? I call the approach “Shutterstock Fellini.”

In another dream, the girls are indians and the boys are cowboys. And not regular cowboys and indians, but hot model chick indians, with precious kitschy vintage seventies costume shop cowboys! And they’re fighting “the battle of the sexes.” Get it?! THAT’S NOT EVEN A METAPHOR! It’s just a figure of speech taken to obnoxious lengths by rich kids with too much time on their hands. This is a whole movie of that. It’s only 85 minutes long, and every second felt like choking down bad pancakes.

We’re in serious trouble if this movie is what passes for a “self-lacerating satire of entitled masculinity” (said LA Weekly, in an otherwise insightful Sheen profile), or “heart-on-the-sleeve warmth” (FilmJournal). The most critical thing this movie has to say in its supposed critique of its protagonist is that he lets himself skate by on charm too often, and doesn’t pay enough attention to his way-too-hot-for-him trophy girlfriend. That’s not self-critique, it’s a humble-brag, revealing nothing but the shallowness of the critic. Waaah, my fabulous playboy life feels empty because I have TOO MANY TOYS! Waaah, my model girlfriend is mad about all the other chicks I banged. There’s no hint at anything deeper that might indicate that any of this was intentional, and even if it was, it’s soooooooo booooooring. Bill Murray is on screen for about 10 minutes, and he’s the only one of the actors who tries to make his lines feel genuine (by the way, wouldn’t making Bill Murray the lead have made this a hundred times more interesting?). And yet, the most interesting character in the whole movie is Charles’ pet toucan. This was one long excuse for sumptuous, wildly unrealistic production design. Who f*cking cares?

The post Review: A Glimpse Inside the Mind of Charles Swan III is the worst film of the year so far appeared first on FilmDrunk.

Review: A Glimpse Inside the Mind of Charles Swan III is the worst film of the year so far