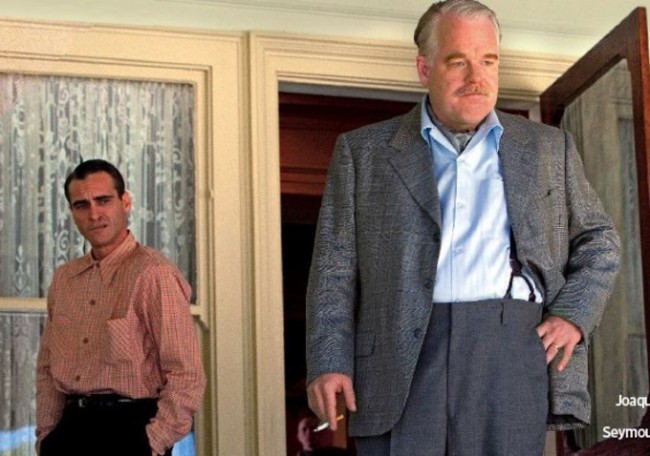 Philip Seymour Hoffman was a bit coy when asked whether he plays L. Ron Hubbard in Paul Thomas Anderson’s The Master, saying, “It’s not the L. Ron Hubbard story… there were a lot of movements at that time.” At the time, we all assumed that was just something one says when dealing with the notoriously litigious and deep-pocketed Church of Scientology, because multiple trailers (which were apparently cut by Anderson himself, no wonder they’re so good) contained basically verbatim quotes from Hubbard and Scientology questionnaires. And now Anderson admits what we basically all knew anyway:

Director Paul Thomas Anderson said it’s no secret that the central character in “The Master” was inspired by Scientology founder L. Ron Hubbard.
The highly-anticipated film, which premiered Saturday at the Venice Film Festival, stars Philip Seymour Hoffman as a charismatic spiritual leader who captivates Joaquin Phoenix’s troubled World War II veteran.
Anderson said he views a love story between two men.
Anderson said the fact that Hoffman’s character was inspired by Hubbard “is not an elephant in the room.” He says he has shown the film to Tom Cruise, who starred in Anderson’s 1999 film “Magnolia” and whose Scientology beliefs are well-documented.
“We are still friends. I showed him the film, and the rest is between us,” Anderson said. [AP]


In perhaps the easiest joke in the history of easy jokes, Cruise said he objected to the negative portrayal of Scientology, but couldn’t resist a love story between two men.

But on a serious note, I’m kind of bummed that the film goes so easy on Scientology that not even Tom Cruise objects to it. On a less serious note, I think a good pick-up line for a chick outside the Scientology Center would be to tell her that if she wants a free personality test all she has to do is hold onto the e-meter, and then point at your dick.