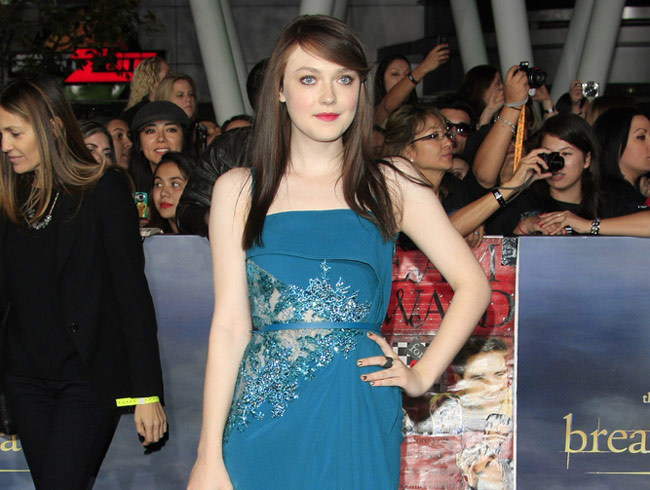 Dakota Fanning actually turned 18 last February, an event that probably would’ve been accorded more fanfare if she didn’t seem so damned normal. She never seemed like a stereotypical child actor, which makes it that much weirder that she went and did a nude scene as soon as she was legal.

Dakota Fanning might be one of the “Very Good Girls” in her 2013 coming-of-age drama, but that doesn’t mean she didn’t get the chance to show off her bad self in the flick. The actress bares more than just her soul in the film, going nude for the first time on camera.

“Yeah, well, I’ve never done that before and I’m very newly allowed to do that,” she explained to MTV News at the Sundance Film Festival, where she was out promoting the movie. “I was newly 18, so yeah, it was, it’s kind of a sensitive thing, but it’s a part of life.”
Fanning grows up big time in the film, which follows her and her pal, played by Elizabeth Olsen, as they embark on their journey through adolescence, on a quest to lose their virginity, and all the repercussions that come along with it. It also means that Fanning had to capture that life-changing moment in the film. [MTV]

Like I said, even as an avowed pervert, this feels weird. I don’t believe in body shame except as it pertains to myself, so if a girl wants to jam out with her clam out, that’s kool and the gang, but this definitely tilts the Dakota Fanning dial that was firmly pointed at “normal” back towards “stereotypical child actress.” But then again, I smoked about eight billion cigarettes the day I turned 18, just because I could, and if the government had said minors couldn’t buy dog poop, I probably would’ve smeared it all over my body like Predator. So I guess I get it. All I know is, she keeps doing nude scenes, she’s going to have to change her name to Dakota FUNning, am I right? (*bow tie spins, gets yanked off stage*)

I can’t believe I made it through this entire post without mentioning Chloe Moretz.