Is All That Booze Damaging Your Liver?

Fancy monitors and gadgets claim they can make a happier, healthier person. The emWave2 intends to do just that by wiping out feelings of anger, anxiety, or frustration, and swapping them for a more peaceful state. Can a gadget that is part heart-rate monitor, part game platform, and part analytics engine really calm our beating hearts? Greatist tried out the emWave2 (courtesy of HeartMath) to give you the inside scoop.

The emWave2 is a gadget that tracks a user’s pulse either through a thumb-monitor or an ear clip monitor. Users participate in a number of prepackaged games meant to calm the senses and build a sense of inner zen, which they can then track and compare on included software. HeartMath, the company that produces the emWave2, claims regular practice can bring better sleep, more alertness, less worry, more positive attitudes, and better focus and decision-making. What’s more, they say the device and accompanying software help users’ health, sleep, relationships, and quality of life improve. The emWave2 is one of many gadgets part of the expansive Quantified Self Movement (self-tracking meant to improve health) so The Greatist Team decided to dive in head first. 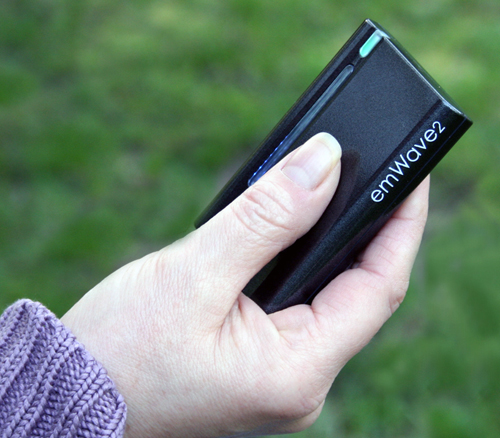 The emWave2’s main device is smaller than an iPod but packs some potentially huge health boosts. The gadget records pulse through a thumb sensor or ear piece (for hands free recording). It can then plug into a laptop and translate that heart rate information into a moving graph (like the ones on hospital monitors).

All the graphs and doo-dads can be confusing, but the whole system boils down to one idea: reaching coherence. No, we’re not talking about holding your liquor, “coherence.” In this sense, the word refers to a state of synchronization between the heart, brain, and autonomic nervous system (the term was coined by the Institute of HeartMath). Achieving coherence — basically feeling zenned out — has been linked to mental, emotional, and physical benefits like decreased stress levels[1][2].

Sounds lovely and all, but how do we reach this utopian state? Unlike a relaxed state (low energy), coherence is a calm but energized state. The emWave2 comes with computer software that stores data so users can compare sessions. The software includes four interactive games (lasting from three to 10 minutes) that respond to coherence levels. The higher the coherence, the better the performance in-game. These games are a little silly, but they are meant to help focus the user. One game, called the “Garden Game,” gradually morphs a nature scene from black-and-white into a vibrant colorscape as coherence improves. (The garden is also eventually populated by unicorns and rainbows.) Another game, called “The Balloon Game,” is about a hot air balloon that rises and falls, speeds up and slows down, with changes in coherence. 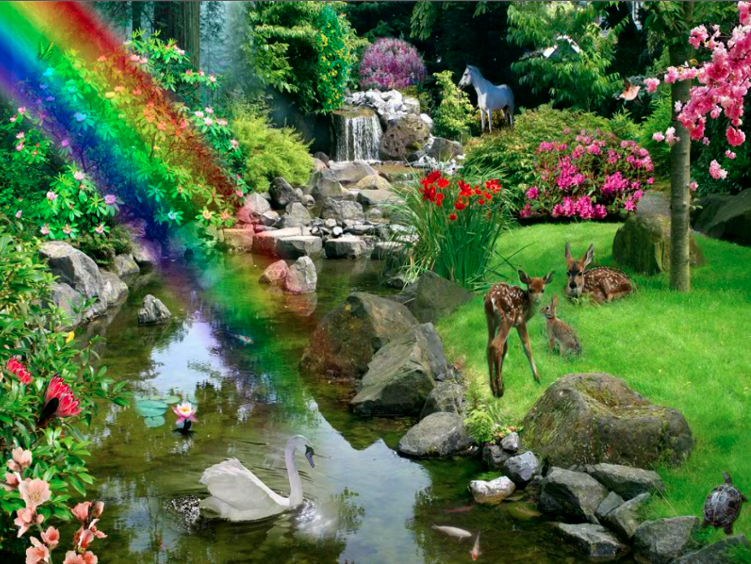 When I received the emWave2, I plugged it in and was entirely confused by the moving heart rate peaks and valleys. Thankfully HeartMath offers an over-the-phone orientation. After being guided through a breathing technique called “belly breathing,” I was then asked to close my eyes for one minute and think of a time I was praised for a job well done. When I opened my eyes after the moment of silence, I was surprised how easily my level of the green bar indicating coherence skyrocketed with a little deep breathing and some positive memories.

After more than 30 sessions, I found a few tricks that worked for me. Playing soothing, relaxing music seemed to be beneficial, as well as envisioning my breath following a figure eight configuration in and out of the heart. Though it felt kind of silly, I found that repeating positive mantras in my head had a really positive effect. “I am appreciated, I am loved,” and “I am successful, I am happy” were two I frequently employed. One session, I recalled a simple text “love u, so proud” from my mom.

During my emWave2 trial period, I was commuting two hours to and from work. The best time to use it happened to be while riding the train, which was also the time I felt most stressed and tired (not the ideal). This meant I had a lot of trouble reaching coherence. In a packed train car, I was not only distracted by the noise, but preoccupied with the funny looks I received once I hooked up the FBI-looking gadget to my ear lobe. At times, I felt frustrated when my laptop showed I couldn’t bump up my level of coherence, which probably stressed me out even more.

The emWave2 can definitely help people to de-stress and hit a more zen mind-set, just don’t expect next-day results. Lots of practice and dedication to the system will yield results. There are many versions of the emWave2 (with a range of software and goals), but the version I used sells for $229. With a pretty hefty price tag, alternatives to the device may be more realistic to de-stress. But